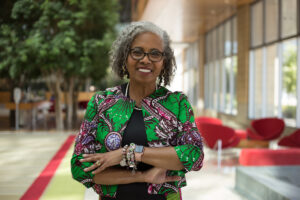 On Thursday, October 27, 2022, from 5-7PM, Rutgers Graduate School of Education, The Institute for the Study of Global Racial Justice, and School of Management and Labor Relations are pleased to present a signature lecture on Critical Race Theory (CRT) in Education entitled “Debating What’s Debatable: Understanding the CRT/I Argument.”

This will be a fascinating and insightful conversation on an important topic with Dr. Gloria Ladson-Billings, who is credited with introducing researchers and scholars in the field of education to CRT.  Dr. Ladson-Billings is the Inaugural Distinguished Race and Social Justice in Education Scholar-in-Residence at Rutgers Graduate School of Education and the past president of the National Academy of Education and the American Educational Research Association (AERA).

Gloria Ladson-Billings is Professor Emerita and former Kellner Family Distinguished Professor of Urban Education at the University of Wisconsin-Madison. She is the former President of both the National Academy of Education (2017-2021) and the American Education Research Association (2006). She is author of the critically acclaimed book, The Dreamkeepers: Successful Teachers of African American Children, two additional books and editor of 12 other books, as well as more than 100 book chapters and journal articles. She is a Fellow of the British Academy, a Fellow of the American Academy of Arts & Sciences, a Fellow of the American Education Research Association, and a Hagler Fellow of Texas A&M University. She has been won numerous scholarly awards and 9 honorary doctorates from national and international universities.