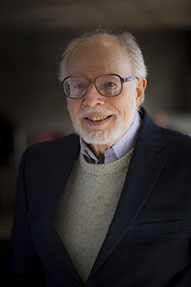 He has served as Director of Rutgers’ Center for Mathematics, Science, and Computer Education, and as University Director for Science and Mathematics Partnerships. He organized and directed New Jersey’s Statewide Systemic Initiative in Mathematics, Science, and Technology Education. Subsequently he served as Director of MetroMath: The Center for Mathematics in America’s Cities. These activities reflect his commitment to achieving both excellence and equity in STEM education.

In the domain of mathematics education, Prof. Goldin’s research has focused on the characterization of internal and external systems of representation, especially their role in mathematical learning and problem solving. His leadership of the Working Group on Representations of the International Group for the Psychology of Mathematics Education (PME) culminated in the publication of two special issues of the Journal of Mathematical Behavior in 1998. He chaired the Research Survey Team on Representations for the 2008 International Congress on Mathematics Education (ICME), where he presented an invited plenary lecture. He was an early advocate of the importance of the affective domain in mathematical learning, arguing that it plays an essential representational role in reasoning and problem solving. A special issue of the Mediterranean Journal for Research in Mathematics Education (vol. 9, no. 1, 2010) was dedicated as a tribute to his work.

In the domain of mathematical physics, Prof. Goldin was an early co-discoverer (with colleagues at Los Alamos National Laboratory) of the possibility of “anyon” statistics (interpolating Bose and Fermi exchange statistics of quantum particles) in two space dimensions. He is known as well for his work on local current algebras and their representations, measures on infinite-dimensional configuration spaces, quantum vortex configurations, nonlinear electrodynamics, and nonlinear variations of quantum mechanics – particularly, the discovery of the “Doebner-Goldin equation” and related nonlinear gauge transformations. He is presently working on problems in nonlinear and conformal-invariant electrodynamics, in relativistic quantum field theory, and in statistical physics.

His current research in education focuses on affect and engagement in mathematical learning and problem solving. He works internationally on several research projects and conference series, ranging from a project based in Norway on artificial intelligence simulation of human mathematics learning, to efforts to strengthen STEM education in Benin, Africa. His inspiration for work in education arises not only from his educational background, but from his concern for educational equity. His vision is to inspire the teaching of mathematics in ways that fulfill students’ fundamental needs for connection, empowerment, inspiration, and beauty. His teaching philosophy is to help students develop deep conceptual understanding, and to engage them actively in doing mathematics.